Drones have come to our lives in many aspects. However, their energy consumption and autonomy are still an issue to be dealt with in order to be applicable in more fields of interest.

As in the past that many discoveries and inventions mimic nature, so a team of researchers at the Swiss Federal Institute of Technology Lausanne, led by Enrico Ajanic, have built a 284-gram drone with a maximum wingspan of 1.05 metres inspired by the northern goshawk (Accipiter gentilis).

Ajanic contended that both multicopter drones and winged drones have an innate flaw. The first ones can hover and move well, but can’t fly long distances, whereas the latter can fly long distances, but aren’t very agile. He claimed that the robo-hawk brings the benefits of different unmanned aerial vehicles into a single unit.

“These results shed light on the avian use of wings and tails and offer an alternative design principle for drones with adaptive flight capabilities,” wrote the authors in a paper for the journal Science Robotics.

The idea behind constructing this robo-hawk is imitating the flight behaviour of birds by equipping the robot with motors that allow its wings to fold in or out, and its tail to contract or to fan out. The robo-hawk spreads its wings and tail to gain height and then, upon reaching top speed, the wings and the tail are tucked in, thereby enhancing aerodynamics, imitating a real hawk flight.

“The morphing wing and tail structures of this design are insightful and novel,” said Jonathan Aitken at the University of Sheffield, UK, who was impressed by the robot’s ability to adjust its manoeuvrability mid-flight. “It offers the potential for unconventional flight manoeuvres, such as slow but controlled flight at high angles of attack”.

Ajanic aims to integrate artificial intelligence to increase the robot’s level of autonomy and rendering it capable to fly without human control or supervision. 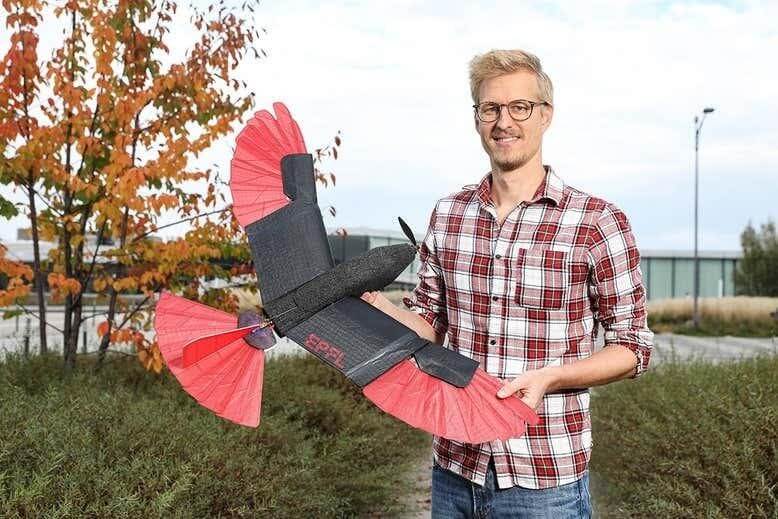