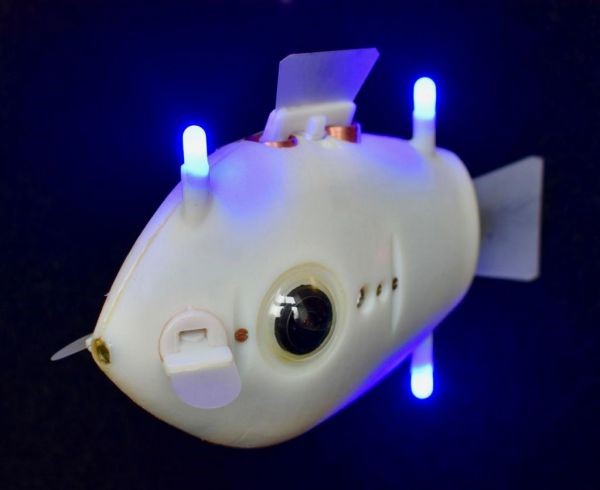 Shoals of fish exhibit complex and synchronized behaviour, which helps them find food, migrate and escape predators. The fish do not communicate with each other to agree on what to do next, but their collective behaviour emerges through spontaneous coordination, while each fish is making decisions based on what it sees the others around it do.

This decentralized behavior, self-organization and cooperation have always fascinated scientists, especially robotics experts. Now, for the first time, researchers from the School of Engineering and Applied Sciences and the Wyss Institute for Biologically Inspired Engineering at Harvard University in the United States, who published their work in the journal “Science Robotics”, have developed fish-robots that can synchronize their movements in the water like a shoal of real fish, without the slightest external control. It is the first time that the complex collective behavior of submarine robots is achieved without outside intervention.

“Robots often undertake missions in areas inaccessible or dangerous to humans, where human intervention may not be possible. “In these situations, it is really useful for a highly autonomous robotic herd to be self-sufficient, even if things like GPS and Wi-Fi are not underwater,” said researcher Florian Berlinger.

The synchronization of the -up to seven- robotic fish was made possible thanks to a new optical tuning system with blue LED light integrated on them, analogous to the bioluminescence of real fish. Each mechanical fish has two camera-fins and three LED lights. The cameras detect the lights on the surrounding fish and then an algorithm, integrated into each robot, determines the distance and direction of the others, so that each “fish” adjusts its behavior accordingly, e.g., circularly swim in groups.

Not coincidentally, the development of the robotic swarm was done with the support of the US Navy Research Bureau, which -obviously- foresees (and) military applications.