Simple and interacting robots, in large numbers, can possibly unlock stealthy capabilities for realizing complicated tasks. However, it has been rather challenging to get these robots to achieve a real hive-like mind of coordination. 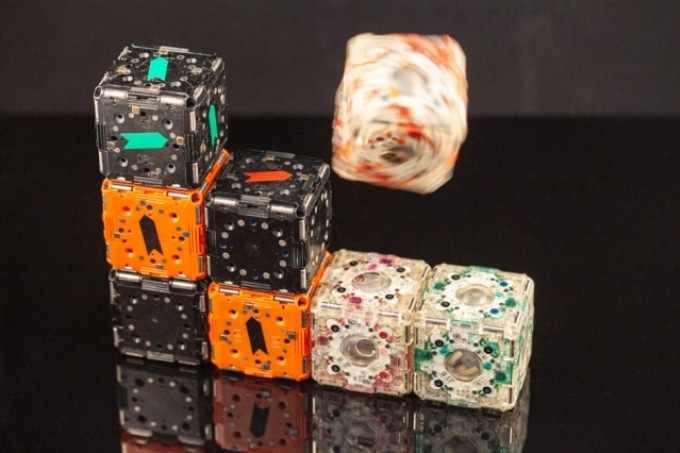 In an attempt to overcome this challenge, a team of researchers from MIT’s Computer Science and Artificial Intelligence Laboratory (CSAIL) has developed an amazingly simple strategy—self-assembling robotic cubes that can roll across the ground, jump through the air, and climb over and around one another.


Six years following the first iteration of the project, the self-assembling robots can presently “communicate” with one another through a barcode-like system on every face of the block. This block enables the modules to recognize one another. The autonomous fleet, totaling 16 blocks, can currently achieve simple behaviors or tasks such as tracking light, following arrows, or forming a line.


Every modular “M-Block” is integrated with a flywheel that moves at 20,000 revolutions every minute and uses angular momentum when it is halted. Permanent magnets, located on each edge and every face, allow any two cubes to adhere to one another.


Although the cubes cannot be exploited as easily as, for example, those from the video game “Minecraft,” the researchers believe that they could provide robust applications in inspection, and ultimately disaster response. One can imagine a burning building, where a staircase has vanished.


In the coming days, one could simply throw the M-Blocks on the ground and watch them build out a transitory staircase for ascending the roof, or descending the basement to save victims.