One of the major 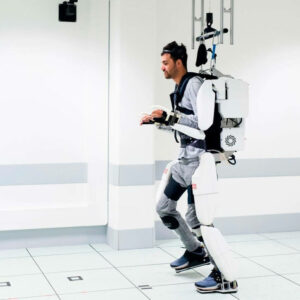 contributions of science is serving the humans’ needs. Disabilities make a person feel constrained and fully dependent to his closest people. However, French researchers at biomedical research centre Clinatec and the University of Grenoble claim that they had overcome this problem in a premature, still functional, approach.

A tetraplegic 30-year-old man was able to move all his limbs using a revolutionary mind-controlled exoskeleton fir the first time after he was paralyzed from the shoulders down after falling 15m at a nightclub in 2015. The system, which works by recording and decoding brain signals, was trialed in a two-year study.

The 30-year-old man underwent a surgery to place two implants over the parts of the brain that control movement. Sixty-four electrodes on each implant read his brain activity and beamed the instructions to a computer. With the use of a software the brainwaves are read and turned into instructions to control the exoskeleton.

“It was like being the first man on the Moon”, the 30-year-old man mentioned. For one more time science proves that it works for the improvement of patient’s life providing them a quality life with autonomy.